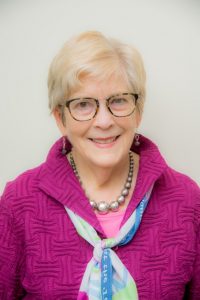 The Minerva award is presented annually by Maine NEW Leadership to recognize a Maine woman who exemplifies the values of the program, including leadership for the betterment of Maine; a commitment to civil dialogue; and a passion for civic engagement.

A long-time champion for education and for Maine’s women and children, Cathcart served in the State Legislature representing Clifton, Eddington, Orono and Veazie from 1988–1994, and as the Senator from then District 7, part of Penobscot County, from 1996–2004.

In Augusta, Cathcart chaired numerous legislative committees and task forces, including the Joint Standing Committee on Appropriations and Financial Affairs; the Blue Ribbon Commission on Postsecondary Educational Attainment; the Children’s Mental Health Oversight Committee; and the first Joint Select Committee on Research and Development, among others.

She sponsored or co-sponsored legislation guiding state investment in research and development; expanding family and medical leave for employees; defining parental rights and responsibilities in cases of domestic violence; strengthening protection from abuse provisions in Maine law; and addressing stalking and reproductive rights.

Beyond advocating for education in Augusta, Cathcart served on the New England Board of Higher Education for 15 years, including chairing the 48-member Board of Delegates from six New England states, and was a founding member of the Maine Compact for Higher Education. She is currently the College-University Chair of the American Association of University Women of Maine State Board.

Prior to her legislative service, Cathcart was a hotline volunteer for Spruce Run of Bangor, providing education, support and safety planning to victims of domestic violence or abuse. She was later employed as a community education coordinator with Spruce Run, which is now known as Partners for Peace. In this role, Cathcart continued her work to inform regional domestic violence initiatives, to develop and implement training for law enforcement, and to build safe and reliable support networks for survivors. Her activism influenced regional policy, contributing to the establishment of Rape Response Services of Bangor and the addition of a victim’s services coordinator in the office of the district attorney in Penobscot and Piscataquis counties.

From 2004–18, Cathcart has served as a senior policy associate at the University of Maine’s Margaret Chase Smith Policy Center, sustaining connections to legislative leaders in Augusta by developing the Distinguished Maine Policy Fellows program, serving on the planning committee for the Maine Development Foundation’s Policy Leaders Academy and the University’s Legislative Affairs Committee under former UMaine presidents Robert Kennedy and Paul Ferguson. In 2009, she co-founded Maine NEW Leadership, a non-partisan summer institute charged with energizing and empowering the next generation of Maine women to become effective civic and political leaders.

Cathcart, who was named to the Maine Women’s Hall of Fame in 2013, received UMaine’s Maryann Hartman Award in 2006, the Merle Nelson Women Making a Difference Award from the Maine Centers for Women, Work and Community in 2011, and two awards in 2018 — the Mabel Sine Wadsworth Achievement Award from the Mabel Wadsworth Women’s Health Center and a Doctor of Humane Letters degree from UMaine.

The Minerva Award has traditionally been presented at the Women of Power reception, an annual celebration that brings together legislators, Maine NEW Leadership graduates and aspiring women leaders. Proceeds from the reception support the Maine NEW Leadership program, which is offered at no charge to participants. Janet Mills received the inaugural Minerva Award in 2018, in acknowledgment of her position as Maine’s first female governor. Governor Mills’ reflection on the Minerva Award and a congratulatory message to Cathcart is available online.

Due to the coronavirus pandemic, there will be no reception in 2021; the Minerva Award was presented virtually. The award presentation and an interview with Cathcart, conducted by the Director of Maine NEW Leadership, Amy Blackstone, is available on YouTube.

Donations to Maine NEW Leadership honoring Cathcart can be made online.