Senator Susan M. Collins, discusses her experiences on the Senate Aging Committee and serving as its chair for the 114th Congress. This committee has three major priorities: investing in biomedical research targeting diseases that disproportionately affect older Americans, such as Alzheimer’s and diabetes; protecting seniors against financial exploitation and scams; and improving retirement security.

Alzheimer’s is the nation’s costliest disease and affects more than five million Americans and their families.  Currently there is no means of prevention, effective treatments, or cure for the disease, however, the Senate approved a 60 percent increase in research funding. Collins argues that a national plan to combat this disease, as well as other debilitating conditions, must include assistance for family care givers.

Nearly one in three Medicare dollars is spent treating people with diabetes. As the median age of the American population increases, the incidence of the disease is expected to rise. Government funded biomedical research—which has risen to over a billion dollars for diabetes alone—improves the health and longevity of Americans and facilitates encouraging breakthroughs and new discoveries.

Fraud and Financial Exploitation of Seniors:

It is estimated that financial schemes targeting seniors will cost them over $2.9 billion as of 2010.

In 90% of fraud and financial exploitation schemes against senior citizens the individual is targeted by someone that he or she knows quite well.

This type of abuse against senior jeopardizes their physical, emotional, and financial wellbeing.

Maine is on the cutting edge of combating fraud and exploitation of seniors through programs such as “Senior$afe.” This economic policy innovation in Maine can serve as a federal model for training banks and credit unions to recognize when seniors have fallen victim to fraud.

25% of retirees have no form of financial security or income beyond the social safety net provided by Social Security.

The retirement insecurity of seniors is multicausal and includes the end of defined-benefit pensions in the private sector, the financial crisis which began in 2008, the rising costs of healthcare, the need for long-term medical care, and the increase in longevity requiring more money set aside for retirement. Further, many Americans are still in large amounts of debt when they reach retirement age.

Maine’s demographics present obvious challenges in the face of a rising median age. However, seniors play an unexpected role in the economy as well. A preponderance of entrepreneurs and business owners are between the ages of 55 and 64.

Seniors are able to draw on their life experience and real-world education as well as a lifetime of networks to make them successful business owners.

As the baby boomer generation becomes a silver tsunami of retirees, the policy work of the Senate Aging Committee and the policy innovations occurring in Maine become even more important. 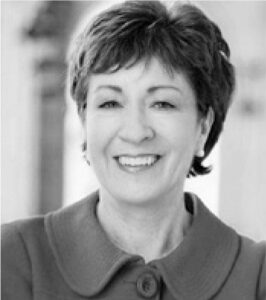 Susan M. Collins has represented Maine in the US Senate since 1996. She has earned a national reputation as an effective legislator who works across party lines to seek consensus on important national issues. Sen. Collins chairs the Senate Select Committee on Aging and serves on the Appropriations and Intelligence Committees, as well as the Committee on Health, Education, Labor and Pensions. Known for her Maine work ethic, Sen. Collins has never missed a vote in her years in office—more than 6,000 votes in a row.