The Right of Independent Thought 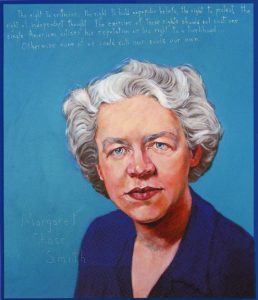 In the remarkable 1950 “Declaration of Conscience” speech criticizing the House Un-American Activities Committee, Senator Margaret Chase Smith listed several basic tenets of the American character, including the right to criticize, the right to hold unpopular beliefs, and the right to protest. These are the rights one exercises in moments of crisis. But Senator Smith also offered a fourth right, the right of independent thought, which may guide our actions in good times and bad, whether or not our institutions are functioning in a way that we find beneficial or just.

The right of independent thought is not a simple proposition. It requires that Americans think critically, express themselves clearly, and pursue a broad education as a basis for making sound decisions. It is a right that depends on the information and skills we acquire by studying the humanities.

For the past two years, the American Academy of Arts & Sciences (AAAS)— through its Commission on the Humanities and Social Sciences—has been engaged in public discussions about the state of the humanities and social sciences in the United States, discussions that are directly relevant to the development of independent thought among Americans of all ages and backgrounds. The commission has sponsored large and small public events and has been the subject of media coverage in print and online, on radio and television. All of these activities focused on the value of a broad, liberal arts education. In a speech delivered in Albany, New York, in 2013, commission-member David Souter, retired associate justice of the Supreme Court of the United States, declared that “what the humanities and social sciences have to teach us is the variety of truth, the provisional nature of conclusions, the sources of illumination from people of other backgrounds and other perspectives, and the magic that can occur when they are combined.”

Awareness of both the provisional nature of our judgments and the value of individual perspectives is essential to informed policy making. To create a healthy and happy society, we must continually seek to understand people from other backgrounds whose experiences might be different from our own. We must understand our own cultural habits and biases lest we make hasty decisions that compound the problems that we seek to overcome. And we must find new ways to collaborate across social and cultural divides so that, together, we can discover and advance the common good.

This is how I understand Senator Smith’s insistence upon the right of independent thought. It is, as Justice Souter said, “the magic that can occur” when we pursue the humanities and social sciences in a way that is inclusive, self-critical, and open to new ideas and experiences.

The Commission on the Humanities and Social Sciences responded to a bipartisan call from U.S. Senators Lamar Alexander (R-Tennessee) and Mark Warner (D-Virginia), and Representatives Tom Petri (R-Wisconsin) and David Price (D-North Carolina), who asked for an examination of how the humanities and social sciences support American democracy and competitiveness.

Their letter invited the Academy to respond to the following question:

What are the top ten actions that Congress, state governments, universities, foundations, educators, individual benefactors, and others should take now to maintain national excellence in humanities and social scientific scholarship and education, and to achieve long-term national goals for our intellectual and economic well-being; for a stronger, more vibrant civil society; and for the success of cultural diplomacy in the 21st century?

Fundamental to this request was a belief that an educated nation makes better decisions at home and abroad, for individuals and for the larger community. It is a belief that I share, and I am grateful for the interest and forethought of the senators and members of Congress who called upon the academy to begin this work.

The commission responded with “The Heart of the Matter,” a report that outlines specific strategies for strengthening and improving humanistic and social scientific scholarship and education. Like the Congressional request that inspired it, “The Heart of the Matter” was drafted in a spirit of optimism about the role that these essential categories of thought and analysis have played and continue to play in American civic life. As the commission stated in the report’s introduction:

The nation’s founders understood that their experiment in republican government—a government bound by law and rooted in the consent of the governed—depends on citizens who can think critically, understand their own history, and give voice to their beliefs while respecting the views of others. These qualities are not born, but taught.

In other words, the commission understood its subject not as a set of disciplines or institutions—not a collection of campus centers or departments—but as the broader educational resources and the complete network of intersecting institutions that together shape the development of independent thought among Americans. Among its recommendations, the report calls for renewed support for primary and secondary school teachers; educational initiatives that prepare citizens for democratic participation; a greater emphasis on language learning and international education; and collaborations of humanists, social scientists, and natural scientists to address major global challenges such as the provision of clean air and water, energy, and health care.

Since the publication of “The Heart of the Matter” in 2013, the commission has initiated a wide range of public activity including a variety of efforts to reinvigorate humanities programming in primary, secondary, and post-secondary education; to develop new facilities and resources for scholars; and to increase funding for humanities programs at the local, state, and federal levels. The commission was pleased to assist in the successful efforts to create a new University of Maine Humanities Center (UMHC), and to participate in the second annual Maine Humanities Summit that examined the humanities and public policy in May 2014. Both of these initiatives exemplified the multi-institutional and multidisciplinary collaborations that the commission encourages, connecting scholars to the public in new and innovative ways.

As an expression of its own commitment to the ideals set forth by the commission—and its belief that public policy must be based on evidence—the AAAS also expanded its Humanities Indicators, a dynamic, online resource that gathers and disseminates statistical information about the state of the humanities in education, research, and public life.1 The project now supports a program of publications as well as an online forum for discussions about new and updated data and has become a trusted source of reliable information for policymakers and the media.

This work is not complete, nor will it ever be completed. Independent thought must be renewed continually and cultivated at every turn, or it becomes fixed ideology that cannot adapt to changing circumstances. In the “Declaration of Conscience,” Senator Smith enumerated the many perils of such ideology. But she also advanced the terms for its defeat—in the free and open dialogue that is the most important public benefit of a broad education attentive to the humanities and social sciences. – 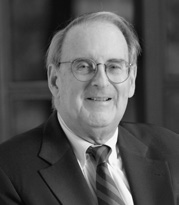