In this post, a research team from the University of Maine highlights the changes that Maine’s climate is likely to undergo over the next century. They suggest that while reducing greenhouse gases is crucial, Maine needs to be prepared to adapt to the impacts that are already happening due to climate change throughout various ecosystems and economic sectors across the state.

The effects of climate change are already here in the state of Maine. It is likely that the increased levels of greenhouse gases will persist in the atmosphere for thousands of years to come. Thus, it is imperative for policymakers to understand the potential effects of climate change on local and regional resources if Maine is to both adapt and prosper in the coming century.

The geography and geology of Maine is incredibly unique and requires more focused attention. More than any other state, Maine’s social and economic wellbeing depends on the health and productivity of the forests, fields, lakes, rivers, and the marine waters of the Gulf of Maine.

Many other places in the world have a variety of ecosystems, however, few have such variety in close proximately as Maine. In fact, the primary reason for high biodiversity in Maine is the extreme variety in climates within a relatively small area. The character and complexity of the state offers both unique challenges but also opportunities in the face of the changing climate.

The following map highlights Maine’s variety of climates, a fact that is easy to take for granted. This map shows the three climate divisions from the National Weather Service, however, the actual diversity of climate in Maine is much greater and accounts for the wide variety of plants and animals that thrive in the state. 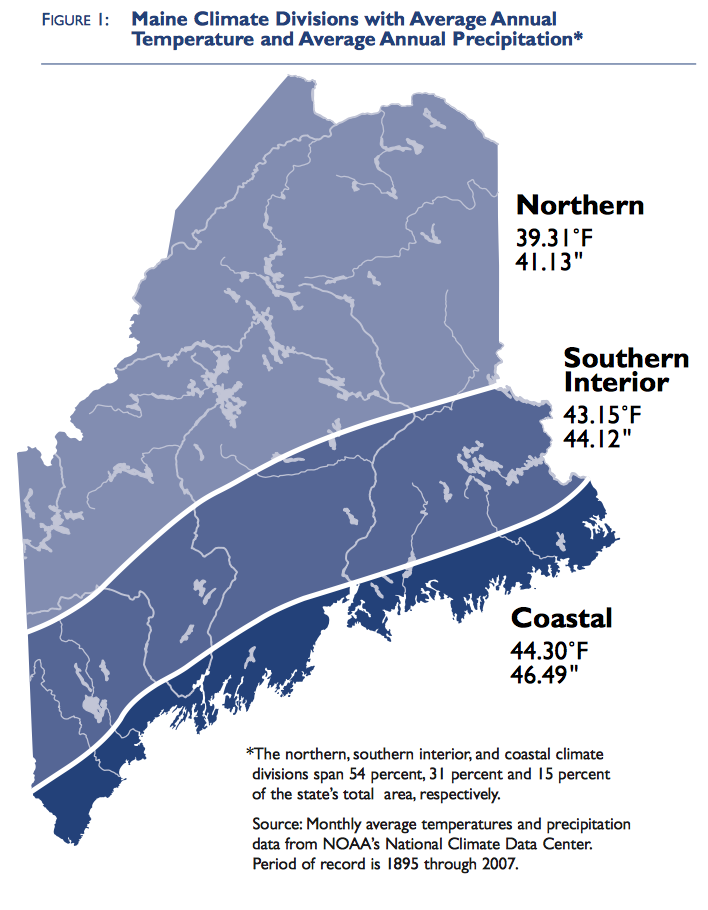 The waters of the Gulf of Maine moderate both summer and winter temperatures along the coastal zone, keeping the coastal division relatively mild for the remainder of the year. In contrast, the interior of northern Aroostook County experiences warm summers and some of the coldest temperatures and highest snowfalls in the eastern U.S.

Today, all three of these climate divisions are warmer than they were 30 years ago. Further, the plant hardiness zones used by farmers and gardeners have shifted north and the growing seasons for fields and forests is getting longer.

Surface waters of the Gulf of Maine have warmed almost two degrees Fahrenheit since 1970 and the rate of sea-level rise is accelerating from half a foot in the last century to a predicted rise of two feet or more by 2100.

All three climate divisions also are trending towards wetter conditions over the last 50 years. The seasonality of events is also shifting, especially in winter and spring, when snowmelt and peak river flows and ice-out on Maine lakes occur earlier. 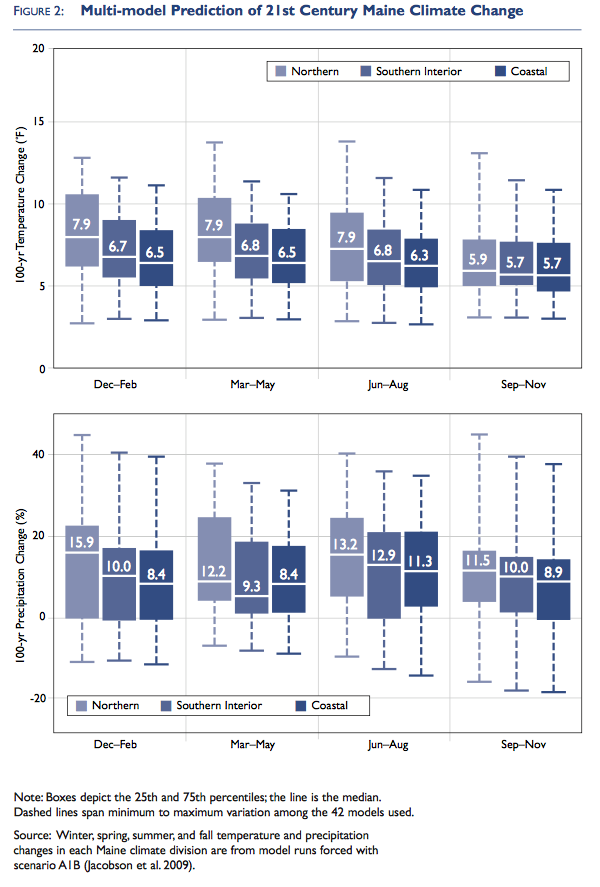 Depending on future emissions scenarios, changes in the region’s climate over the next century include a 3 to 10 degree F increase in average annual temperature, a longer growing season, a 2 percent to 14 percent increase in precipitation, less snow, more rain, and highly variable precipitation. These increases are greatest in the north and least along the coast.

The warmer and wetter future will affect the seasons as we know them, with more winter precipitation in the form of rain. A warmer ocean could also increase the frequency and intensity of hurricanes, with implications for water and wastewater management, coastal infrastructure, and water quality.

From our first inventory of greenhouse gas emissions in 1995 to the nation’s first statewide climate change law in 2003, Maine has been a leader in addressing climate change and in reducing greenhouse gas emissions. These important mitigation efforts must continue; at the same time, Maine needs an adaptation plan that addresses the business of opportunity and promotes resilience.

Reducing human and ecosystem vulnerability to harm and increasing residence in the face of change is both an economic and moral imperative. This period of transition is also a period of opportunity, and Maine can lead the nation by taking advantage of the opportunities presented by this transition into the twenty-first century.

We’ve gathered other articles on energy policy and environmental policy from MPR archives in our reading lists.

Hayhoe, Katherine, et al. 2006. “Past and Future Changes in Climate and Hydrological Indicators in the US Northeast.” Climate Dynamics 28:381-407.