Food and the Urgency of Now

On the last Sunday in January of this year, I walked across the National Mall to the National Archives building to view President John F. Kennedy’s first Executive Order, issued the day after his inauguration. Staring at the original signed document that initiated and authorized the modern food stamp program, now called the Supplemental Nutrition Assistance Program (SNAP), I was deeply touched realizing how far-reaching and vital to our country’s most vulnerable people this order and its successive versions in food assistance programs have been to the health and well-being of millions of Americans.

Personally moved by the extent of poverty that he witnessed in West Virginia during his presidential campaign, and seeing the hunger and deprivation firsthand, JFK privately resolved to take action as president as soon as he had the official capacity to do something significant. He signed the Executive Order within 24 hours of his swearing in ceremony.

Now, 50 years past the signing of that Executive Order, federal and state government food-assistance programs reach one out of four Americans at some time during the year. While Americans and Mainers rarely experience the severe hunger and extended deprivation still widespread in the poor countries of the world, even here too many people of all ages experience periods of hunger and food insecurity in the midst of plenty.

With the exception of the years of the Great Depression when hunger was widespread, federal and state government food and nutrition programs have never been as urgently needed as now, in the extended jobs recession of the past three years. And, the same urgent need can be said of the thousands of food pantries and emergency kitchens operated by commuﾭnity and faith-based groups across the country in response to hunger and food insecurity. 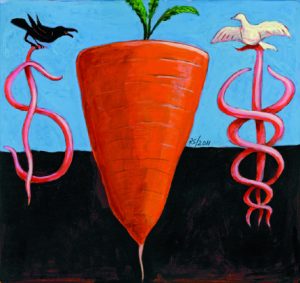 The importance of food in so many aspects of our lives and in our communities is hard to overstate. Essential to our individual health and survival, food and its production, preparation, and consumption also shape much of our community life in agriculture, family life, communal events, and local economies. The same can be said about the social impacts of food. And food is one of the most influential determinants of one’s health.

Across the country, there is a resurgence of interest in all aspects of food, its healthy features, its production, access to healthy food, and the positive impacts of locally grown and produced food. And, organic farming is benefiting from among the highest levels of community and individual support. In Maine the widespread rebirth and support for locally grown and produced food is a most promising development for communities and for the Maine economy. Locally grown (“native” to Mainers) can be enjoyed in homes, restaurants, bakeries, supermarkets, and from farm stands and farmers’ markets.

The Paradox of Hunger and Obesity

Earlier this year, I participated in the official launch of the Dietary Guidelines for Americans (DGA) 2010—the nation’s blueprint for healthy eating—issued every five years since 1980. The DGA 2010 is the most science-based edition of the guidelines and will influence and inform dietitians, nutritionists, families, chefs, health care providers, schools, food manufacturers and processors, and will command the engagement of public food and nutrition entities for many years.

For the better, in conjunction with public and voluntary food-assistance programs, there is a concerted and expanding effort to educate and promote healthier foods, less processed foods, more locally grown and produced foods.

Farmers’ markets, farm-to-school programs, and “Know Your Farmer— Know Your Food,” are all reflections of policies and programs intended to support healthier eating throughout the lifespan.

Renewed interest in home gardens, organic farming, healthier eating, farmers’ markets, school gardens, native fruits and vegetables, and even the ability for households to purchase fruits and vegetable seeds using food stamp benefits are all hopeful signs of reversing and altering our overreliance on processed foods and a return to healthier eating.

The focus on healthier foods comes at a time of heightened, justified concern in Maine and across the country on the prevalence of obesity and related heath conditions that are due to obesity.

The focus on healthier foods comes at a time of heightened, justified concern in Maine and across the country on the prevalence of obesity and related heath conditions that are due to obesity. Healthier foods combined with proper exercise obviously help one’s quality of life. But they also help prevent avoidable healthcare costs due to obesity-related conditions.

I have seen the impacts of locally grown and caught healthy foods in nutrition programs. But I am also mindful of the “green” dividends from locally produced farm and sea products. Maine is well positioned to further exploit the foods produced and caught in the state, and I look forward with enthusiasm to growth in Maine and beyond in healthier eating and increases in locally grown foods.

Kevin Concannon has served as under secretary for Food, Nutrition, and Consumer Services in the US Department of Agriculture since 2009. He has had a lengthy and distinguished career in public service. Over the past 25 years, he has served as director of state health and human services departments in Maine, Oregon, and Iowa. He has championed expanded services, improved access, alternatives to institutions, consumer choices, affordable health care, diversity in workplace and programs, and modernization of public information technology systems.