The Maine Woods: A Legacy of Controversy

In 1963 wilderness advocate William O. Douglas described the 10-million-acre Maine North Woods as eastern America’s “last natural frontier,” a land of pristine beauty worthy of the nation’s best efforts at preservation. Others portrayed it as an almost inexhaustible source of wood and fiber and a backbone for the northern Maine economy. These contrasts reflect some of the difficult choices ahead for those who use and love the woods. “Maine natives,” journalist Richard Saltonstall once said, “have taken their rural backyard… pretty much for granted, enjoying it any old time without necessarily looking at it as something special” (Saltonstall 1974: 255). Yet like rural backyards everywhere, Maine’s north woods is changing. A brief history of this region puts these changes and choices in perspective.

The Northern Forest cascades off a discontinuous range of mountains running northeastward along the western boundary to the shores of the Gaspé. This forest has always been dynamic; its 50 or so tree species have been in the area only about 10,000 years and are still in the process of settling into balance with regional climate and soils. Euro-Americans, of course, accelerated these changes. By 1850 every river system in Maine had been logged, and since then, the second-and third-growth forest has responded to a dizzying array of pressures: agricultural expansion and contraction, a succession of wood markets, new technologies, and changing recreational and ecological sensibilities.

Land tenure has been no less dynamic. Maine bought the Massachusetts share of the state’s unincorporated townships in 1853 and quickly conveyed these public lands to lumber operators and land speculators over the succeeding 20 years. Since then huge chunks of north woods real estate have been sold and re-sold in national and global markets. None of this is unique, but here globalism confronts a New England town-meeting culture and a way of life that depends to a large degree on the illusion of isolation, making suspicion of outside ownership a familiar theme in Maine politics. Today’s large landowners, no matter what their goals, encounter this residue of suspicion, and the claim to this “lost” land as a public resource remains a core ingredient in Maine political consciousness.

For all its complexity, the Maine North Woods is inseparable from the Maine way of life: it has been and remains a cultural and recreational commons. But deciding what we want from the Maine North Woods is complicated by the fact that it stands on the border of the most heavily urbanized region in North America, and our thinking about it has been shaped by a century of urban wilder­ness fantasies. Here at the interface of two vastly different value systems—rural and urban—forest management is practiced under the concerned eye of millions of city dwellers, making this a land of wildly conflicting expectations.

For all its complexity, the Maine North Woods is inseparable from the Maine way of life: it has been and remains a cultural and recreational commons.

Public interest in the Maine woods developed slowly over the 19th century. Given the vastness of the woods and the remoteness of lumbering districts, Maine people initially left the timber industry mostly to its own devices. (Even as late as 1924, West-Coast forester Carl Stevens was amazed to find a seemingly wilderness region, alive with loggers: “one travels entirely by water,” he wrote. “the whole country is a network of lakes and streams [providing] cheap transportation for the natural products of the region” [Stevens 1924: 49].) Logging generated little public concern through the first half of the 19th century. This changed with the arrival of the paper industry and the portable sawmill in the 1880s. Rapid expansion, mechanization, and inten­sive cutting triggered a strong sense of unease, particularly among farmers on the borders of the lumber districts who grew concerned about the fate of the small woodworking mills that undergirded the local economy. Having worked the land for generations, farmers appreciated the way trees were woven into the fabric of their society. Forests moderated the climate and stabilized the stream flow, ensuring a steady supply of water for their gristmills and sawmills. They shielded the meadows from floods and the fields from desiccating winds. Tree roots penetrated the earth, absorbed mineral and organic matter, and passed these nutrients on through sequences of growth and decay to pastures and fields. In the mosaic of farm and forest, farmers saw something moral and balanced and indeed beautiful, and they resented the scars spreading across their familiar landscape. Countless petitions, editorials, and proclamations show how closely they identified forests with the rectitude of rural life. Out of their work with the land, rural Mainers composed a conservation ethic for the Maine woods. 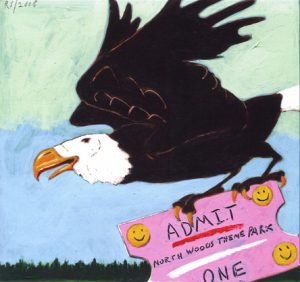 By the turn of the 20th century, others found reasons to lay claim to the north woods as commons, in spite of the fact that the vast majority of the land continued to be privately owned. Local fish and game organizations defined it as habitat for publicly owned game and fish; resort owners viewed it as a founda­tion for the tourist landscape; textile mill owners required forested watersheds to stabilize the streams that powered their turbines; and women’s clubs saw proper forestry as a way of ensuring Maine’s future. These various claims to the Maine woods as commons blended into a call for state forest purchases and a state-imposed minimum cutting diameter.

Landowners countered with a proposal for publicly funded forest-fire prevention, and in 1909 the legislature compromised by levying a special surtax on forestland owners to fund the Maine Forestry District, devoted exclusively to forest-fire protection. In return, land­owners promised continued recreational access to their forests, a concession that underwrote an elaborate system of sporting camps, guide services, and hotels. In his 1913 inaugural address governor William T. Haines, himself a lumberman, capped the long debate over public control by proclaiming it “much better to leave all our wild lands as they are today, in the hands of private owners, with the right reserved…to everybody to go upon them for hunting and fishing, recreation and pleasure, which makes of them a great natural park, in which all of the people have great benefits and great interests” (Haines 1913: 24). As Haines suggested, the line between private and commons remained blurred.

How much of this old conservation legacy remains is difficult to say, but it does suggest some important consider­ations as we ponder the future of the Maine’s North Woods. Today, as forest industry capital becomes increasingly liquid, a new threat has emerged in the form of precipitous corporate turnovers, liquidation forestry, subdivision, resort and second-home development, land postings, and clearcutting. A growing sense of crisis has re-opened the debate over public rights, while opinions on pres­ervation and management have become increasingly polarized. Here we might turn to the lost history of conservation in Maine for guidance.

First, this history highlights the degree to which Maine people have always considered the north woods a public resource, not only for recreation but also for a variety of benefits we would consider today both ecological and aesthetic. The health of the forest is a concern to all: this valuable lesson emerges from the early conservation movement and must be part of the ongoing debate over the Maine woods. Second, this history highlights the diversity of conservation thought in Maine. Too often, we view conservation in monolithic terms, as a means of protecting a static and delicately balanced natural world from any human activity that might change it. We divide the debate into those who protect nature and those who exploit it. Turn-of-the-century farmers were no less the conservationists, but they saw nature in different terms: as a dynamic and unfinished world made perfect by human effort. They embraced change—often radical change—but they considered their husbandry and their forestry a part of the balance of nature. “I don’t believe mother earth, if properly treated, will ever refuse to remunerate the husbandman for his labor,” a Maine farmer said. But he noted, after a year of unusual drought, that “nature sometimes forces her lessons with great severity, compelling man to endure hard penalties for his improvidence.” this cautionary note was the kernel of rural conservation. The conservation community must make room for those who gained their sense of stewardship by working the land. This stewardship has many voices—recreational, scientific, spiritual, practical—and past conservation efforts succeeded to the degree that they blended them into a unified theme, the Allagash Wilderness Waterway being one such compromise.

The future of the Maine North Woods depends on acknowledging the commons and the many claims upon it, on recognizing the priceless ecological heritage that so impressed Douglas as well as the legacy of change that makes these woods such a fascinating historical artifact. Thoreau venerated the woods not only because its wildness overwhelmed him, but because it revealed a tradition of Homeric confrontation with nature. Maine writer Elizabeth Coatsworth made the point several decades ago: “to most of us a wilderness is not very interesting. Human life must have been lived in a place, and have developed its…special pattern…. there must be some dignity of the [human] spirit to make earth and forest and river alive to us and part of us” (Coatsworth 1947: 212–213). What Maine needed, she implied, was a middle ground, a place made natural by people “living a certain way of life.”

The future of the Maine North Woods depends on acknowledging the commons and the many claims upon it, on recognizing the priceless ecological heritage that so impressed Douglas as well as the legacy of change that makes these woods such a fascinating historical artifact.

Coatsworth’s sense of place incor­porates the best of Maine conservation thought: preserving a wild forest haunted by the memory of Indians, voyageurs, trappers, loggers, and others who worked the woods and whose accomplishments are still part of the north woods tradition. Such a forest would evoke images of ecological purity, but also give us moral lessons about human stamina, simplicity, and living in tune with nature. This powerful unifying theme combines the various claims on the commons, and this unity gives Maine agency in determining the future of our precious resource.

Recognizing divergent approaches will not end the debate over conservation, but perhaps the long tradition of public scrapping about the meaning of the Maine woods is itself healthy. It suggests that the definition of nature has not become static and offers hope that the search for consensus will prevail in an acceptable balance of traditional wood use, tourist development, new value-added products, wilderness management, and conservation. This well-trammeled forest will meet these complex demands, as it has for 200 years, in good part because it resonates so deeply in the hearts of all maine citizens.

Richard W. Judd is professor of history at the University of Maine, where he has been on the faculty since 1984 and has been the editor of Maine History. From 1981 to 1984 he edited the Journal of Forest History. His books include Natural States:The Environmental Imagination in Maine, Oregon, and the Nation; Common Lands, Common People:The Origins of Conservation in Northern New England; Maine:The Pine Tree State from Prehistory to the Present; and Aroostook:A Century of Logging in Northern Maine.